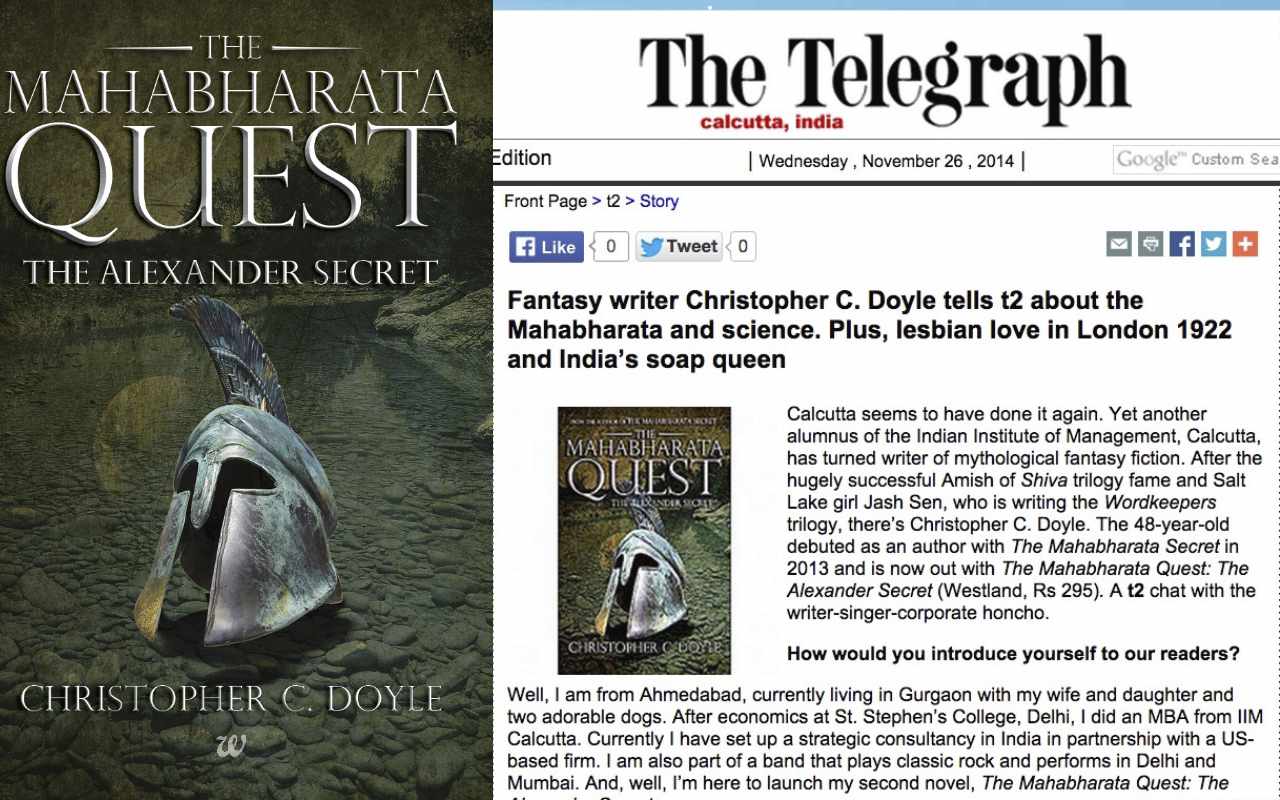 Calcutta seems to have done it again. Yet another alumnus of the Indian Institute of Management, Calcutta, has turned writer of mythological fantasy fiction. After the hugely successful Amish of Shiva trilogy fame and Salt Lake girl Jash Sen, who is writing the Wordkeeperstrilogy, there’s Christopher C. Doyle. The 48-year-old debuted as an author with The Mahabharata Secret in 2013 and is now out with The Mahabharata Quest: The Alexander Secret (Westland, Rs 295). A t2 chat with the writer-singer-corporate honcho.

How would you introduce yourself to our readers?

Well, I am from Ahmedabad, currently living in Gurgaon with my wife and daughter and two adorable dogs. After economics at St. Stephen’s College, Delhi, I did an MBA from IIM Calcutta. Currently I have set up a strategic consultancy in India in partnership with a US-based firm. I am also part of a band that plays classic rock and performs in Delhi and Mumbai. And, well, I’m here to launch my second novel, The Mahabharata Quest: The Alexander Secret.

How would you introduce your new book in one sentence?

I’d say it is a contemporary thriller which is an intriguing blend of history, science and mythology.

What about The Mahabharata attracted you?

One reason is because it is an interesting collection of stories. Secondly, it is what is called itihasa, which means this is what actually happened. It is a long story but I am going to make it as short as possible.

I read a book many, many years ago called Hindu History by Akshoy K. Majumdar, which is about 100 years old. This book looks at all the scriptures as a source of information about a history of India that was never recorded. It also occurred to me, what if certain events and descriptions in The Mahabharata could be explained using science? That is when the entire subject caught my fancy.

Give us an example…

I’ll tell you this much, I have tried to explain all the shlokas in The Mahabharata using science.

Your favourite and least favourite characters from the epic?

I have never really thought about it that way but my two favourite characters would probably be Krishna and Arjun. The least favourite would possibly be Yudhishthir.

Going by Amish and Ashwin Sanghi’s success in this genre, would you say that Indian mythology is “in” right now?

I would certainly say there is an interest and it is the younger generation that is displaying a lot of interest. They are reconnecting with mythology. I would not use the term “in”, because that conveys the impression of just being a trend or a fad. I think this is here to stay as long as we are able to write stories that engage people and make sense to them.

Your books have often been compared to Dan Brown’s. What do you have to say about that?

(Laughs) I have read Dan Brown and I think there are a couple of very important differences between his work and mine. The first is that all his works have a religious flavour, none of my books do. And unlike Amish or Ashwin, I do not intend to go down the religious way. The second difference is, if you look at Angels and Demons, you have the Illuminati playing a very big role. In The Da Vinci Code it was Jesus Christ and his supposed marriage — these are very well-established conspiracy theories about which a lot has been written already and Brown has taken them and written very nice stories about them. My book has no conspiracy theory. There are theories but they are all new. For example, in The Mahabharata Secret, if I had to use a conspiracy theory, the secret would have turned out to be a nuclear weapon, the Brahmastra, the biggest conspiracy theory about The Mahabharata. I do not believe that, because in The Mahabharata there is no evidence that the Brahmastra was a nuclear weapon. So I have created a different story that has a theory backed by science.

You are pretty active on social media… has it been helpful?

After my first book came out, some readers gave me valuable feedback and I used them in my second book and a lot of people have told me that it is better than the first. If that is true, then my readers deserve the credit for writing to me and it was the Facebook engagement that helped.

What kind of books do you read?

I read a mix of different books and I have always been very interested in science fiction. If you look at my library at home, it has Isaac Asimov, Jules Verne, Philip K. Dick, H.G. Wells. In fantasy I like Robert Jordan and, of course, Tolkien. I also read a lot of classic literature and poetry.

One book you wouldn’t be caught dead reading?

Fifty Shades of Grey by E.L. James. As an author I should not be saying this but as far as I am concerned, it is not a book worth reading.