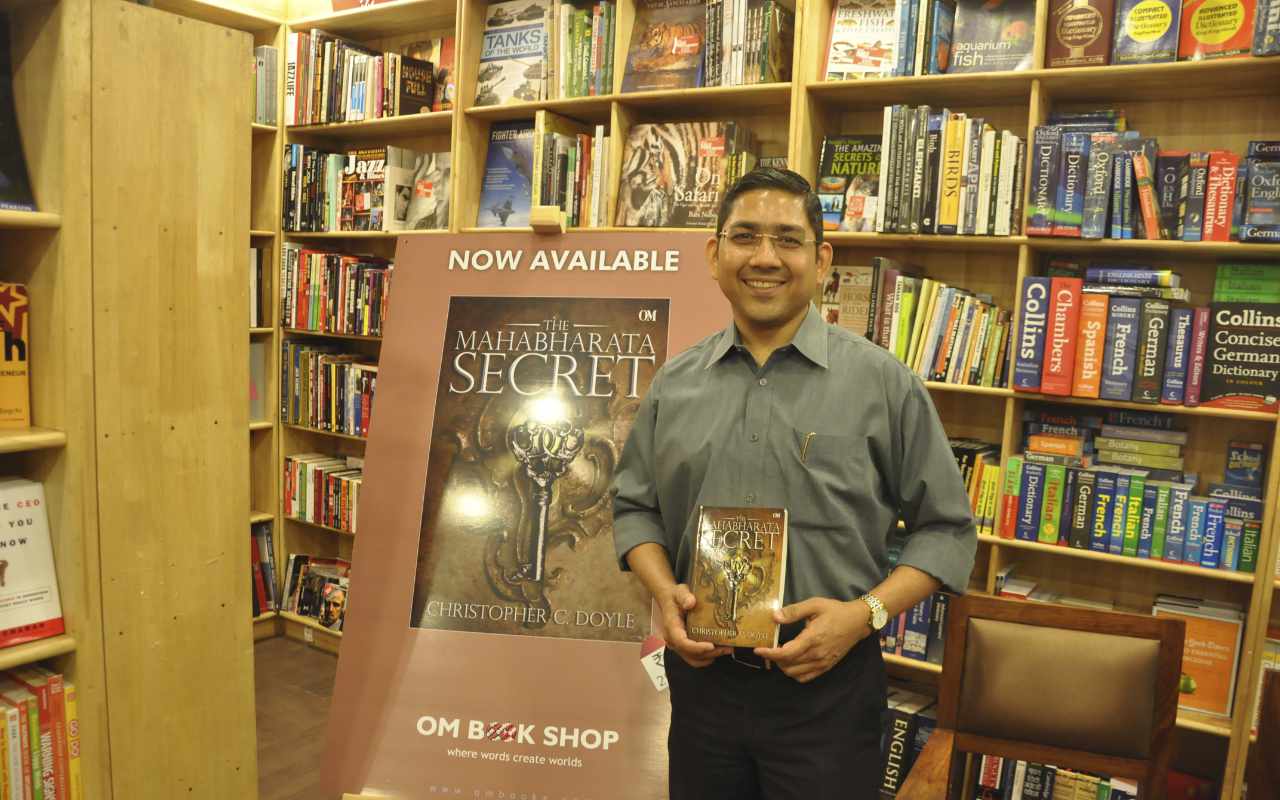 The Mahabharata Secret–a world of myth, treasure, weapon, mystery, adventure, invisible threads and crime. Debutant author Christopher C Doyle has written a racy- pacy novel highlighting man’s innate search for the better but perhaps not constructive. Doyle graduated from St. Stephens College, Delhi, with a degree in Economics and studied Business Management at IIM Calcutta. He has written articles on management and business for several publications, and is regularly invited to speak at conferences. He worked with leading multinationals before setting up a strategic consultancy in India in partnership with a US-based firm. He is also a certified Executive Coach and works with senior executives to help them achieve better results in the workplace. Christopher is a musician and lives his passion for music through his band called Mid Life Crisis which plays classic rock.

Excerpts from an email interview:

What triggered the journey to write fiction?

I’ve been writing fiction since my schooldays and it has always been a dream to be a published author. The impetus for writing a full length novel came when I first created a fantasy world for my daughter (who was three years old at that time) and began spinning tales of adventure to narrate to her every night at bedtime. Those tales spawned my first ever fantasy novel which never got published. Once my daughter outgrew those fantasy tales, I started a search, in 2006, to write a story that is set in modern India but inextricably linked to India’s historical and mythological past, since my daughter has a keen interest in history and mythology.

It is that search that led to The Mahabharata Secret being written between 2006 and 2008. The book has a lot of suspense, epic, crime, mystery, thrills and has a very western touch in terms of reminders of James Bond, Dan Brown… who have been your inspirations?

I’ve always had a mixed taste in my reading habits. In school, I grew up reading the classics–Shakespeare, Shaw, Walter Scott, Dickens, Edgar Allan Poe, Thomas Hardy and the poems of the English classical poets. At the same time, I read a lot of popular fiction–Jules Verne, HG Wells, Arthur Conan Doyle, JRR Tolkein, Isaac Azimov and Robert Heinlein were my favourites. And, in later years, I added Robert Jordan, James Rollins and Terry Brooks to this list. I guess that explains the ‘western touch’. Since most of these authors wrote either science fiction, crime mysteries or fantasy, I imbibed my love of suspense, epic, crime and mystery from them, so I suppose their influence shows in The Mahabharata Secret.

How much time did you put in for research on the historical aspects? Did you come across references to secret weapons?

I spent a lot of time on research, the better part of the two years writing the book was spent on research because I wanted to be as accurate as possible about the historical and scientific facts mentioned in the book. There were lots of references to secret weapons, but most of them were wildly speculative conspiracy theories which are not grounded in scientific fact but belong more in the realm of fantasy. I could not find any scientific theory that validated these speculations. So I focused on the mythology that could be explained through science and created a story around that scientific theory.

You chose an offbeat subject for an Indian author. Most recent Indian literature has been focussed on social elements connected to the country. How has the response been so far?

Through The Mahabharata Secret, I have tried to interpret our mythological heritage through the eyes of science. I have been overwhelmed by the response. The number of readers who have written to me to say that the approach I have taken resonates with them has exceeded my wildest expectations. I am convinced that there are many Indians who share my view of science in ancient India as an alternative perspective on the ancient, unrecorded history of India–a perspective that weaves together history, mythology and science and technology through the epics and scriptures. Many readers have even asked me whether the story in The Mahabharata Secret is a true story which assures me that this scientific interpretation of ancient Indian history, through the Mahabharata, is not only acceptable but also relevant to our times.

What are the future plans? Any new book and the journey ahead?

I am grateful to Om Books International for placing their faith in my book and after seeing the response that the book has had within its first month of publication, there will definitely be more books to come. I write because I get a lot of satisfaction from creating something that people find entertaining and stimulating. Many readers have already written in saying they are eagerly awaiting the next book and I am looking forward to delivering on their expectations. I have already started work on my next book and will reveal more about the book very soon!

Ambica’s take on the book

The title made me feel I would find a lot of myths and facts, but I found a world of science and technology, terrorism and threats, adventures and cross-country investigations. The book begins in Haryana and ends in Bihar, taking you from the modern city of Gurgaon to the little town of Hazaribagh. It has all the thrills needed to make you believe that a secret weapon and technology did exist during the times of the Mahabharata. Well, the world of epic is a world of the invisible for us, except that a few historical evidences suggest its physical existence thousands of years back.

As the main protagonist Vijay moves out of his western lifestyle to the world of terrorists and international threats, you can see the intricate web of life. The excitement is built around his capture, people following him and his belief in holding on to his uncle’s last wishes.

The language is simple and the book has a lot of dialogue which I found the most refreshing part. The conversational tone makes you feel like a participant in the chapters and not a reader. It brings forth images of the simply wow James Bond going on one of those world-saving chases which unfold hidden inner motives and lots of bland-looking people being involved in some blood-chilling events.

Handling a subject as sacred as Mahabharata is not easy, but the author has beautifully blended modern realities with mythical mysteries. And particularly interesting is the hunt for the technology with makes deadly weapons invisible. Not only does the book showcase technological known-how but also historical evidences.
The plot is intricately woven and nothing of the previous happenings are repeated in the following chapters. Each chapter has its own unique flavour and you never feel as if you have lost track of the story.

All in all, an interesting read for all those who love action and adventure, with all the makings of a mystery thriller movie.

Asoka the Great discovers an ancient and terrible secret—a secret buried deep in the Mahabharata; a secret that could destroy the world; a secret hidden away for over 2300 years…

A retired nuclear scientist is murdered. He leaves only e-mails with clues for his nephew. He and his friends follow a trail through ciphers and 2000-year-old ruins. Pursued by powerful dark forces, caught between the secrets of the past and the intrigues of the present, can they unravel the mystery before an unspeakable horror is unleashed on the world…