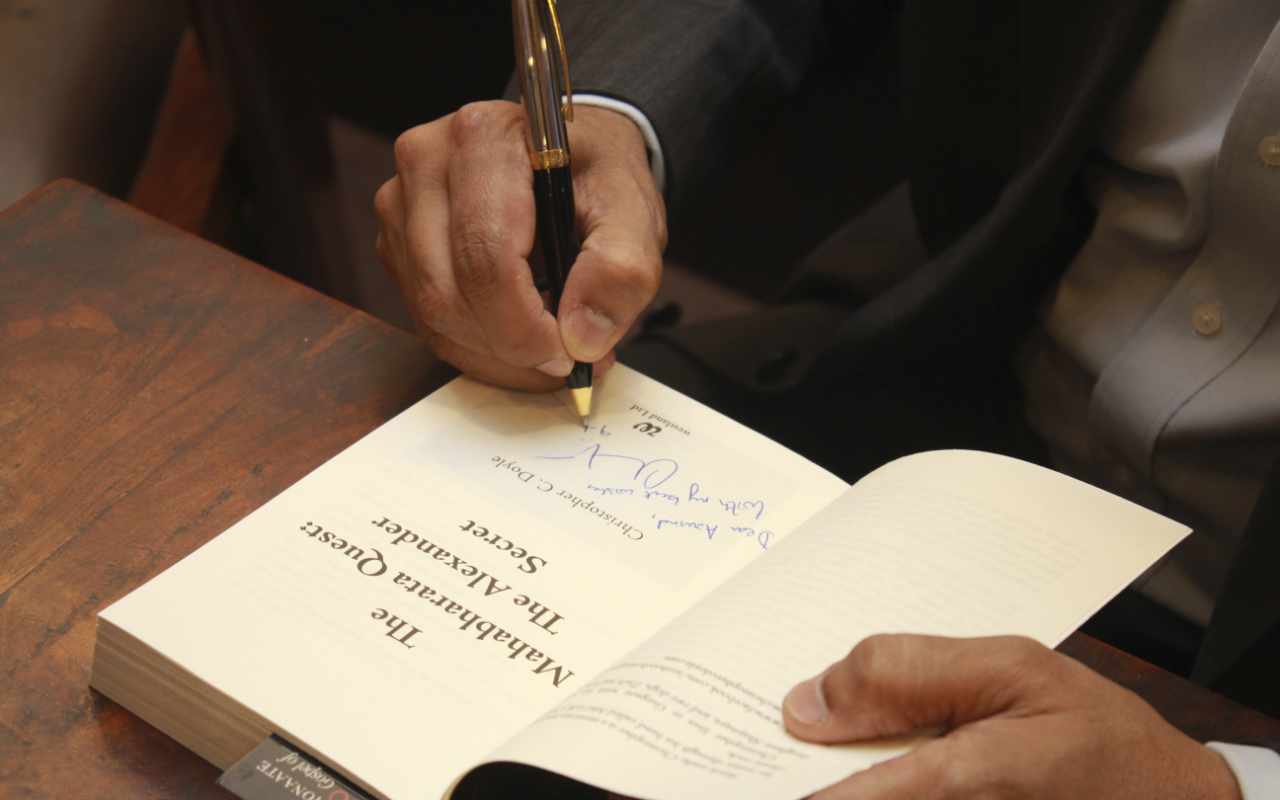 We are in conversation with Christopher Charles Doyle, the bestselling author of ‘The Mahabharata Secret’ where he tells us that the impetus for writing a full length novel came when he first created a fantasy world for my daughter. Enjoy this wonderful interview filled with reality and with a pinch of fantasy, mythology, history

Team WordBite (TWB):Tell us something about you which very few people know of.

Christopher Charles Doyle (CCD): I have dreamed of being a published author since I was ten years old. My foray into writing, while not planned the way it happened, is not an accident but the realization of a childhood dream.

TWB: “….Brought up as a boy on a steady diet of books ranging from classical literature to science fiction and fantasy to poetry and plays…” This is what your website says about you. So tell us your favorite books and authors right from that boyhood to present and what was their role in shaping you as a person you are at present?

CCD: I’ve always loved classical literature – Shakespeare, Thomas Hardy, Sir Walter Scott, Dickens, George Bernard Shaw – were much loved companions right from my boyhood days. I also read a lot of science fiction and fantasy – authors like Isaac Azimov, Philip Dick, Robert Heinlein, HG Wells, Jules Verne, along with JRR Tolkein, Robert Jordan and Terry Brooks also influenced my thinking. And, who can forget Arthur Conan Doyle, who is an old favourite. I think I derived my curiosity about the world around me, my deep fascination with science and an outlook that helped me imagine innumerable possibilities from these writers.

TWB:V.S Naipaul, during a literary festival, had said that a writer, when writing, is a tormented soul. Your views on this comment.
CCD: I enjoy my writing. It could be, perhaps, because I write fiction that entertains rather than fiction that is known for its literary content. I am happiest when I am writing and often get drawn into the world I am creating, into the lives of my characters and the situations they find themselves in. I feel I am more tormented once I have finished a book, which is when I take a break to get over the book that has been completed and start thinking about the next one.

TWB:Why did you choose to write something on this particular genre?
CCD: The impetus for writing a full length novel came when I first created a fantasy world for my daughter (who was 3 years old at that time) and I began spinning tales of adventure to narrate to her every night at bedtime. Those tales spawned my first ever fantasy novel, which never got published. Once my daughter outgrew those fantasy tales, I started a search, in 2006, to write a story that is set in modern India but inextricably linked to India’s historical and mythological past, since my daughter has a keen interest in history and mythology. It is that search that led to the Mahabharata Secret being written between 2006 and 2008. Part of the reason I chose this genre, therefore, is because my daughter is keenly interested in history and mythology and The Mahabharata Secret was written for her to start with. But when I was researching and I came across the legend about Asoka the Great, and I was able to create a link between Asoka and the Mahabharata, it provided me with the opportunity to bring science into a thriller that combined mythology and history in a modern setting. Through The Mahabharata Secret and The Mahabharata Quest: The Alexander Secret, I have tried to interpret our mythological heritage through the eyes of science. I have tried to provide a fresh perspective to a historical age which we all associate with bows, arrows, horses, elephants and chariots, not with cutting edge technology.

TWB:Tell us something about you as a musician
CCD: I love all kinds of music, from jazz to pop to classic rock. As a musician, I play classic rock with my band called Mid Life Crisis.

TWB: Who was your inspiration in this writing journey?
CCD: All the authors I have mentioned earlier.

TWB: Amidst all those positive replies and fan mails all throughout the days when your book was being appreciated, was there any bit of advice that you got from anyone, for your work, which you have emulated thereafter?
CCD: There were fans who wrote in with advice on improving my book, which I really appreciated. Some of them even re-wrote some of the scenes to demonstrate how they thought the scenes could be improved. Many of these suggestions were really good and I used them for my new book.

TWB: Can you give us a little sneak peak of your upcoming books? What are you been working on?
CCD: My new book – The Mahabharata Quest: The Alexander Secret – has just been released. This is the first book in a series. I have been working on this for a little over a year now. Just as The Mahabharata Secret brought together mythology, science and history (in the form of Asoka the Great and a secret connecting Asoka with the Mahabharata), my new book brings together a myth from the Mahabharata, science and history in the form of Alexander the Great and a secret connecting Alexander to the Mahabharata. Like the first book, the second one is also a thriller with the action taking place in our times. The other books in the series will take the story forward with more revelations about history and mythology through a scientific perspective, in a thriller format.

TWB:When was the last time you did something for the first time? And what was it?
CCD: I am a Gemini and am constantly looking for new things to do.

Rapid Fire
TWB: Your favorite Book(s):
CCD: Lord of the Rings
TWB: Describe yourself in three words:
CCD: An incorrigible optimist
TWB: Thank you Christopherfor this interview, we wish you a great life ahead.